You are here HomeDark Inquest 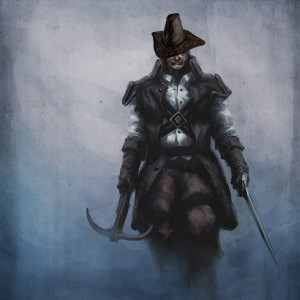 VESLAR NOLLOTH – Born to two decent and kindhearted herbalist/apothecarian parents in the small hamlet town of Wickton, Veslar lived a pretty average life where nothing extraordinary happened. All that came to a head when one day, at 17 years old, a stranger by the name of Erasmus hobbled into town hurt and near death.

Shaggit plays Veslar Nolloth, a human witch hunter apprentice under their leader Erasmus Baldor. He is a hard, rash man that does not see magic as anything but an evil craft which leads good men into deceit. His goal is to eradicate magic wherever he finds it, no matter the consequence

PIPER CANTO – Bane plays Piper Canto, a human warrioress. Piper joined the local military in her youth, disguising herself as a boy to fit in with the crowd. Though her father was a famous bard and her mother was a baker, she found strength in the front lines of battle, wielding her broad sword mightily. After a strange encounter that left her mother and father dead, she abandoned her younger sister, Aria, for many years, continuing to hone her craft. However, fate brought them back together and the guilt of her past stirred a strong sisterly bond between the two. Taking care of Aria as her new goal, as well as finding the dark magic users who killed her parents, she joins with Erasums and Veslar and a dark quest to fight off magic.

ARIA CANTO – Jayne plays Aria Canto, a young, human bard. Aria is strange, whimsical, and quirky, and takes best after her father, a famous musical bard. She spent many years traveling with him as a youth, learning how to pluck the lute and entertain crowds. After her father and mother were brutally murdered by a group of magic wielders, Aria roamed parts of the land, surviving on her music alone. She learned many fascinating tales, but her naivety led to her kidnapping by an eccentric trader. Her sister, Piper, rescues her and the two made up and became inseparable. Reunited, Aria agrees to use her very unique skill set to help Piper, Veslar, and Erasmus seek out dark magic users and bring them to justice.